As dog moms, we often take note of our furry friend’s preferences when it comes to toys and treats. But did you know that your dog may also have a preference when it comes to handedness? According to a recent meta-analysis published in Laterality, some dogs have a paw they favor most when completing certain tasks, like walking down the stairs, reaching for a treat, and holding a toy. The prevalence of paw preference in dogs:

A significant percentage of dogs have a preference for one paw over the other. The study found that dogs are most likely to prefer a specific paw rather than be ambidextrous, with 68 percent of canines showing either left- or right-sided paw preference. However, unlike humans who are predominately right-handed, the dog population as a whole doesn’t favor a specific paw. Instead, paw preference is believed to vary from dog to dog.

The variation in paw preference by task:

While many dogs appear to be paw-preferent, the foot they favor may vary depending on the task at hand. One study, for example, found that when using a conical ball (a toy used to give pets treats, like peanut butter) there was a roughly equal distribution of paw preferences, with some favoring the left, right, or both paws. On the other hand, for repetitive tasks—like being asked to give a paw to their owner—canines appeared to have a more specific paw preference rather than display an ambidextrous response. (Ask your pup to give you their paw a few times to see which one he or she favors most!)

The role of sex in paw preference:

The implications of paw preference for assessing emotional functioning:

But why is it important to know which paw your pet favors? According to one study included in the recent research, paw preference is a useful tool for assessing emotional functioning and psychological well-being in both dogs and cats. The left side of a canine’s brain is responsible for processing positive emotions, while the right side prioritizes negative feelings, like anxiety. Paying attention to which paw your dog favors may provide insight into how your dog is feeling emotionally. So, the next time you’re playing with your pup, take note of which paw they use most often. It might just give you a glimpse into their emotional state.

In conclusion, it’s fascinating to learn that dogs can have a preference for using one paw over the other. Understanding this aspect of canine behavior can give us a glimpse into their emotional state and help us assess their overall well-being. We encourage dog moms to take notice of their dog’s paw preference and use this information to strengthen their bond with their pup.

If you haven’t done so already, take a moment to observe your dog and see if they have a preference for a specific paw.

Share your findings with us in the comments below or on our social media platforms, we’d love to hear from you! 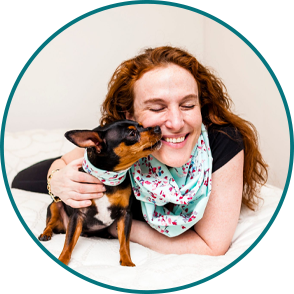